How I Have Seen Men Treat My Daughter 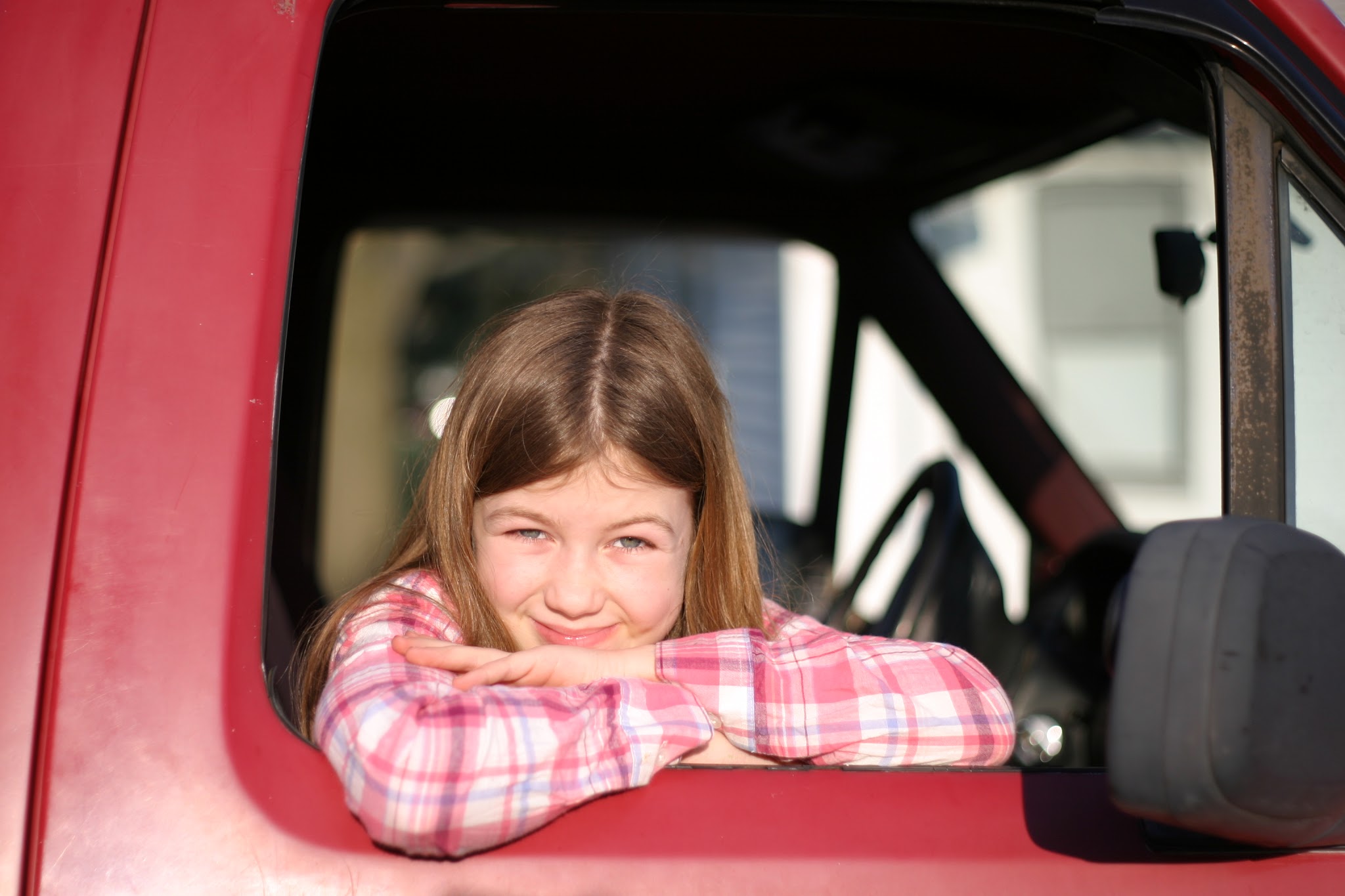 (Sophia, happy as a clam, in her Daddy’s pick up truck.)

A heavyset, gray-haired man, short and jovial, honed in on my cautious, serious daughter the moment she arrived.  She was eight or nine at the time.  He was a volunteer at Vacation Bible School that week, she was just entering a room full of kids she didn’t know in a church we don’t attend and her face reflected the concentrated reserve of an introvert confronted with a room full of strangers.

“Smile!” he commanded before welcoming her or offering his name.  Reluctantly, awkwardly, she obeyed, he was in charge, after all.

Standing nearby, I felt a strong desire to whack that man in the face.  Maybe not exactly, but mostly.  The mama-bear in me recognized, immediately, the inappropriateness of his command and, in it, I heard the echoes of all the men who’ve commanded me to smile over the years.

I too was a quiet, serious girl.  I cannot tell you the number of times men, mostly in passing, reminded me to smile.

“Smile!” they demanded, as they passed me in the mall, in the lunch line where I worked, or walking down the street with my friends.  “You’re too serious,” they would sometimes add, “you’d be prettier if you smiled.”

Sometimes it felt like a harmless flirtation, a backward compliment of sorts.  At least I had a chance at being pretty, if only I would be less, well, less me.  I didn’t realize then that these comments and complaints had nothing to do with me.  Nothing.  I didn’t understand they reflected masculine insecurity, the desire for me to be easier, but not, of course, too easy.

Over time, I got the message that it wasn’t ok to be me.  To be a woman, young or old, who rests serene in her own quiet seriousness is to shirk cultural expectations of the bubbly, giggly girl who lights up the world around her, flashing her pearly whites.  In tending to my own internal fires, I was letting down the male egos in the room, those expansive egos so often in need of continual support.

About a month later, I took my daughter to the pediatrician. She was suffering from a baffling array of symptoms and we had no idea what was going on.  Was it allergies, a cold, a stomach bug?

She sat alone on the high examining table wrapped in a paper gown, while one of our favorite pediatricians, a gentle, thoughtful man, tried to puzzle things out.  My daughter was inordinately worried about the possibility of needing a strep test.  She fears and dreads the test, gagging every time and occasionally vomiting on whoever administers it.

Finally, reaching for the large q-tip in its white paper packaging, the doctor announced that he wanted to test for strep.  My daughter’s eyes grew wide in fear and, seeing her anxiety, the pediatrician offered a few simple tricks to help endure the swab.  Then, he asked whether she wanted to sit on the exam table or in my lap.

She climbed down from the paper-clad bench, hopped into my lap, and I wrapped my arms around her.  Pulling up a chair, the doctor leaned in with the swab, but my daughter held out her small hand and stopped him mid-motion with a clear and simple request.

“Can you wait until I’m ready?” she asked.

“Yes,” he said and sat back, waiting for her command.

She paused, gathering courage, then blurted a quick, “OK.”  She gagged a little, but then it was done, and while we waited for the results, I sat there marveling at this girl of mine.

I was amazed at her centeredness, the way she drew from her own deep well to tell the doctor to pause, to make the space necessary to do difficult things on her own terms and in her own time.

Reflecting on the situation now, I can see how the pediatrician helped protect and reinforce my daughter’s sense of strength and autonomy in a vulnerable situation.  He took her concerns seriously and then helped to allay them by offering concrete strategies for dealing with the awkward swab.

He was not offended by her fear; not belittling or dismissive.  With his ego completely off the table, he didn’t feel the need to chide her into compliance or, worse, to barge ahead with the swab (as I’ve seen other pediatricians do).  He made space for her to connect with her own resources – sitting in her mama’s lap, setting her own timing – and, in the end, my daughter was empowered by the experience.

This, I want to tell her, is how it works.  This, I want to remind myself, is how it should be.  This is how two people interact with grace and respect, how a healthy man doesn’t ask you to weaken yourself to fortify his own ego, but rather lends his strength to create a safe space for you to be who you are – loud or quiet, smiling or not.