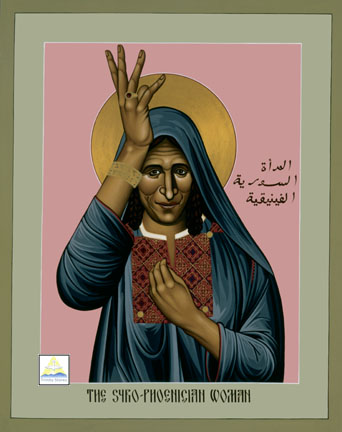 Jesus left that
place and went away to the district of Tyre and Sidon. Just then a Canaanite woman from that region came
out and started shouting, “Have mercy on me, Lord, Son of David; my daughter is
tormented by a demon.” But he did not answer her at all. And his
disciples came and urged him, saying, “Send her away, for she keeps shouting
after us.” He answered, “I was sent only to the lost sheep
of the house of Israel.”  But she came and knelt before him, saying, “Lord,
help me.” He answered, “It is not fair to take the
children’s food and throw it to the dogs.” She said, “Yes, Lord, yet even the dogs eat the
crumbs that fall from their masters’ table.” Then Jesus answered her, “Woman, great is your
faith! Let it be done for you as you wish.” And her daughter was healed
instantly.  Matthew 15:21-28, NRSV

(I preached on this passage yesterday in church and continued learning about the passage during and after our service.)

A man approached me after church while I was tucking my
sermon notes back into a folder.

“There were three words you used that really
struck me,” he said,  “Can you remind me what they
were?”

I looked at him, a solid man, my height and balding, a good
ten years older, perhaps.  He was one of
the few in the congregation I didn’t know well and while I spoke he had
alternated between lowering his head, eyes fix on a spot on the carpet in front
of him, and looking at me with grave concern.
It was easy for the anxious, insecure preacher in me to imagine him
disagreeing with the entirety of the sermon or, more simply, disapproving of a
woman in the pulpit.

“You said three things that happened to the woman,” he said,
“real succinct.”

Lowering his reading glasses from where they were perched on
top of his head, he peered over my shoulder while I rifled through my notes
looking for the line I guessed he had in mind.
Finding it in my bare bones notes I pointed and he nodded and read aloud,
“Ignored, dismissed, and insulted.  That’s
really all there is, isn’t it?”

At first I thought he was referring to my sparse notes, then
I realized he meant that the woman in the passage pretty much experienced the
sum of what we humans can do to each other.

“Thanks,” he said, raising his reading glasses again and
shaking his head as he walked away.

I started the sermon portion of the service by reading the
passage three times, pausing for a brief silence between each reading.  “Try listening with your eyes closed,” I
said.  “All you have to do is pay
attention.”

After the reading, I invited the congregation to share their
impressions of the passage – what did they notice, who did they relate to, and
what were they curious about?  Every time
I start a sermon this way, the congregation identifies almost every single one
of the relevant issues in the text, often outlining the relevant points of my
sermon for me with hardly any effort at all.
I guess maybe that speaks to the power of crowd-sourcing, but I also take
it as a sign that people are much more capable of reading the bible than they
think and that every good reading of a passage begins with a lot of questions
and a little confusion.

During our discussion, one man in the back mentioned how
struck he was by Jesus’ response to the situation – that Jesus seemed to allow
the situation to unfold in front of him and waited before making a definitive
judgment.

This is one of the things I would identify as a positive
later in the sermon too – Jesus listened to the woman despite seeming to be
pretty clear about wanting nothing to do with her.  Because Jesus listens, the Canaanite woman is
able to insert a new perspective into the conversation, one that makes room for
Jesus to recognize and respond to her faith.

I thought about all of this as my husband drove us home with
the kids squabbling in the back of the van and my head pounding from sinus
pressure.  “Ignored, dismissed, insulted.”  I thought about the Canaanite woman’s vision,
the way she shifted the conversation away from the position of those at or
beneath the table to the meal itself which was so abundant it couldn’t help but
overflow beyond the table’s borders.

Riding home I thought about the people in our world who
possess a greater vision, those who are willing to push against status quo and
shift the level of conversation into a wider more productive space.  These people are, most often, outsiders,
people who for one reason or another have been relegated to the outskirts of
society.  But their exclusion, painful as
it is, often comes with the gift of perspective – positioned on the outside
looking in, they often see beyond what is to the possibilities of what might
be.  Lacking the benefits of insider
status, outsiders like the Canaanite woman are often willing to risk more in
order to attain a more inclusive vision and they’re not the only ones to
benefit from it.

People like that are often ignored, often dismissed, often
insulted.  But I wonder what it would be
like if we were to be a bit more like Jesus; if we were to pause a little more
and listen more often to an outsider perspective, if we were to refrain from
ignoring, dismissing and insulting.

When Jesus listens to the Canaanite woman he discovers ‘great
faith’ in a place where no one would have thought to look.  I hope I can learn to listen more to people
with outside perspectives and I also hope I’ll continue to push beyond the
risks to share what vision I’ve been given.  At times like this, when people are so
divided and arguing over a place at the table, we need a broader vision more
than ever.