Do Not Despair (Holes, Laundry, and Dead Mums) 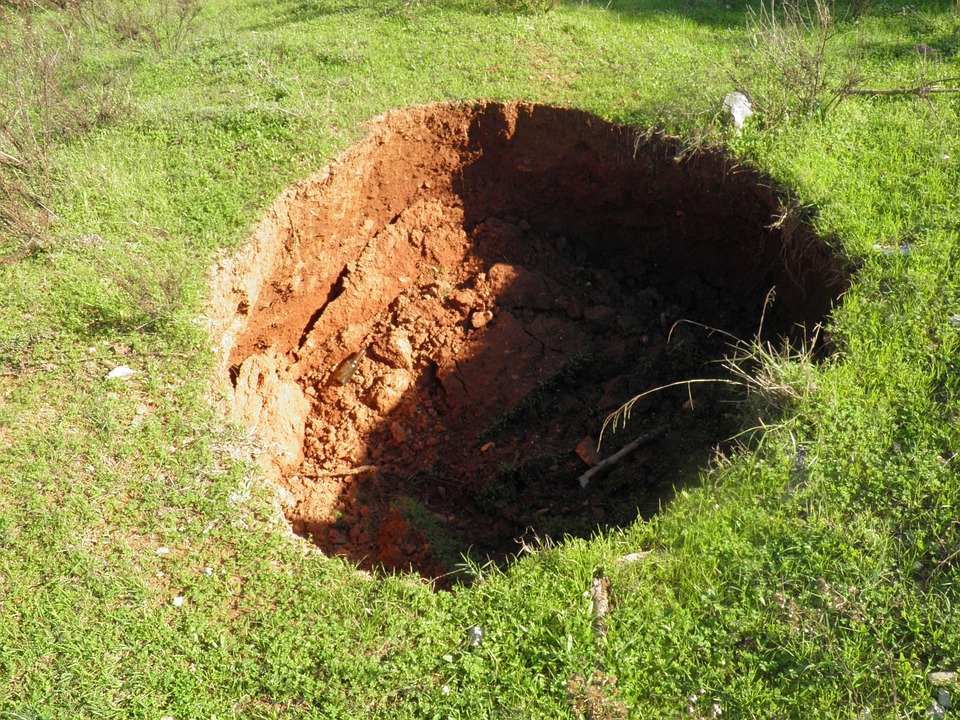 Six boys scanned
the yard from late afternoon until dusk.
They walked with their heads down, six pairs of eyes scoured the
not-yet-green grass.  Each step bore
silent anticipation, nervous chatter bubbled up around their listening.

When the
metal detector beeped, they cheered and rallied around, shovel in hand.  Not-yet-green turned muddy brown as they dug
holes haphazardly throughout the yard.

Holes, all
through the yard; potholes, ankle-twisting pits, mower-wheel-swallowing
craters.

That night,
after getting groceries and returning a movie while listening to a radio talk
show dissect presidential politics, my husband arrived home
agitated.  He was in a state as he filled
me in on the groceries, the politics, the hole situation.  The way he
talked, our yard was a war zone, the site of asteroid and comet landings, a
grand canyon of potential grass laid to waste by six boys and one shovel.

It was dark
out, I had no way to confirm or deny, so I accepted his wild eyed assessment at
face value.  Holes, everywhere.  And politics on the radio on top of it
all.

We
complained about our ruined lawn and ruined country, feeling old beyond our
years and went to bed early.  But in the
dark, our minds raced and nerves jangled.

I opened the
door to the bathroom closet today and found laundry piled knee deep.

I shut the
door tight and left the room.

All day that
pile grew in my mind’s eye – waist deep, chest deep, until I was drowning in
it.  Add to it the pile a mile wide in the
twins’ room, the remains of the stomach bug laundry waiting to be folded and
there’s nearly enough laundry, I’m sure, to fill in a good many of the holes in
our yard.

Something
about those holes and the laundry remind me of the dead mums I wrote about on
Monday.  Last fall they were a riot of
burnt orange and red, waving their hands in the air all along the side of the
little house.  But then cold weather came
and they died back.  Flowers rotted, leaves
shriveled, curled, brown until all that remained were the ugly husks.  Those bare, brown bones rattled at me all
winter long, untidy, a reminder of unfinished business and I stared back at
them from the kitchen window.  There was
no door to shut on them.

At the first
whiff of warm air and sunshine, I marched out to attack the brittle branches
like they were my mortal enemy.  I cut my
hands on them, eager for the pleasure of their demise.  Take
that, mums!  I snapped and twisted,
conquering one small corner of disorder as if its tidying might hold the key to
life.

Mid-twist,
though, I noticed what hid at the base of each frail and failing branch –
small, ruffled, green leaves, the beginnings of next year’s joyful riot.  Here I was, like those boys, finding treasure
in the dirt (minus a hole, of course).  I
continued to twist and break, more respectfully now, looking no longer to rid
us of the dead, but looking for signs of life.

The morning
after hole-mageddon, I looked at it from a different angle and with new eyes I
saw more than holes.  I saw my son excited
to impress boys his own age, thrilled to have an awesome toy for once, to be
the envy, the star with a shovel in hand.
I saw the treasure in his delight and it made the holes less
glaring.  Walking outside later in the day
I was surprised to find most of the yard still intact.  It would take six boys more than one evening
to dig up two acres of land.

There’s so
much to fear, so much to overwhelm in this life.  The bones of things unfinished rattle at us,
hard work is easily undone and more hard work awaits.  This is so very true.  Fear looms large at night, in winter, in the
mud-before-spring season of despair.

Do not
despair, little ones.

God is
always doing something new, do you not perceive it?

Do not believe fear’s whisper in the night.

The good work
of our hands, the feel of the earth between our fingers, the labors of love
for a household, these all remind us – treasure is buried everywhere.  Even, maybe, at
the bottom of the laundry pile.