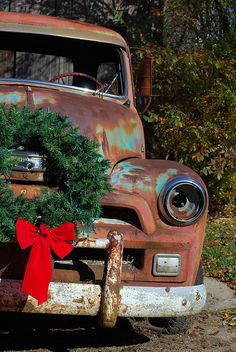 See, I am sending my messenger to prepare the way
before me, and the Lord whom you seek will suddenly come to his temple. The
messenger of the covenant in whom you delight—indeed, he is coming, says the Lord of
hosts. But who can endure
the day of his coming, and who can stand when he appears?  For he is like a
refiner’s fire and like fullers’ soap; he will sit as a
refiner and purifier of silver, and he will purify the descendants of Levi and
refine them like gold and silver, until they present offerings to the Lord in
righteousness. Then the offering
of Judah and Jerusalem will be pleasing to the Lord as
in the days of old and as in former years. – Malachi 3:1-4

By the tender
mercy of our God,

the
dawn from on high will break upon us, to give light to those who sit in darkness and in the shadow
of death, to
guide our feet into the way of peace.’ – Luke 1:78-9

The rattle-trap, red, Ford pick-up squealed out of the
driveway Tuesday morning and something broken inside of it gave voice all the
way to my husband’s work and back home again that night.  He was kind enough to offer to help with
dinner and the kids before buttoning up an old shirt and heading out to the
garage to pop the hood.

Before heading to bed, we decided he would call off work the
next day to try to wrangle a repair.

In the morning the older kids climbed into their yellow
buses and the twins buckled into the van.
John was going to drop them off at preschool before heading to the auto
parts store.  I headed out to the Little
House to twiddle my thumbs as us artist types like to do, grateful to be
excused from the thrice-weekly chore of drop-off.

Minutes later he burst in the door.  “Can you come try to start the van while I
look at the engine?” he asked.  “I can’t
get it to start.”

Out into the cold winter rain I went to turn the key.  The van whined and moaned and finally I
pumped the gas enough to give it a coughing start.

“I guess I’ll leave it on at the parts store,” he said, “I
don’t want to get stuck over there.”

I stood in the driveway and watched him pull out.

We couldn’t leave the van running all morning and how would
we pick up the twins if we couldn’t get it to start?

I dread preschool drop-off because parents are instructed to
pull-in under a carport where a teacher approaches, opens the door, and helps
the kids out.  Sounds simple, right?

Except when your door handle’s broken.

Three times a week I cruise into the carport in our ancient
burgundy minivan and lean back over the seats to pop the door open from the
inside before whatever teacher happens to be on duty can make a fool out of
herself wrestling the finicky handle.

Three times a week I watch the twins climb out while
silently hoping the teacher on duty won’t slide the door far enough open to
cause it to latch.  Most days they do.  Then I’m stuck climbing over the seat again to
unlatch the door and slide it shut.

Wednesday, the day my husband stayed home and the vehicles
went on strike, he didn’t know he needed to preemptively pop the door.  Instead, he sat calmly in the driver seat
while one of the boy’s teachers yanked and pulled on the handle, trying to get
the door to shut.

With a mighty yank, the handle broke right off in her
hand.

“I broke your handle,” she said passing what was left to my
husband.

The truck ended up being an easy fix and it appears the van
was faking.  In the end, I had more time
to write and work than I would have otherwise.

I will say that Wednesday morning I wanted to cry and nearly
did when I couldn’t figure out how we’d get the twins back home.  My mind bounced between righteous indignation, (This is Christmas!  This sort of thing
shouldn’t happen at Christmas!) and self-pity (Of course!).

Somewhere between the opposing poles of control and
resignation I found a tenuous place of surrender.  I clung to it in a way that seems in contradiction to what is essentially a posture of “letting go.”

Making wreaths at the dining room table the following today,
I thought about this thing we’ve got going on, this month-long season of
Christmas in which we feel sorely offended if the world appears to be coming
apart at the seams.  We’re torn between
demanding more – of the world, our children, ourselves – and a death-embracing
resignation.

Let me tell you what I know after wrangling evergreens and
wire – it may be Christmas and you may want something more, but #$^% is gonna
keep on keepin’ on.

Red trucks will scream their way to work and back.

Minivans will embarrass and fake their own deaths.

Children will run wild through your house and you will be
forced to play the “You’re father’s uncle died from falling down the stairs”
card in a vain attempt to scare them straight.
But rather than accepting the logical conclusion that one should not
play on the stairs, they will blame the victim because everyone knows if you’re
falling down the stairs you can stop yourself before you hit your head.

You will accidentally step on the dog and scare the cat who
will then claw the dog right on the nose and those two tiny drops of blood on
that dear sweet nose will make you want to weep.

But worst of all (or is it?) someone, somewhere will take a
gun and shoot one or two or twenty and the seeds of evil that dwell hidden in
the human heart will again seem to block out all rays of light.

You will be tempted between control and resignation.

You will want to decry the forces that be – the cat, the
kids, the world in which “awful and terrible things happen.”

You will want to throw your hands up in the air and walk
away because someone somewhere has again ruined this yuletide season with their
crimes and failures big and small.

But then you will remember.

We don’t celebrate Christmas because the world is
perfect.

We celebrate Christmas because the world is broken.

It’s screaming to and from work, pulling apart at the seams,
liable to break off in your very hands, broken.

Advent is waiting with open hands, open hearts for the One who
will sift through it all, cleansing, purging, until only what’s good, what’s
pure and golden remains.  Until then, we
stand strong, we endure, we hang tinsel and plug in the lights because, for
now, it may be as close as we can get to that for which our hearts so long.