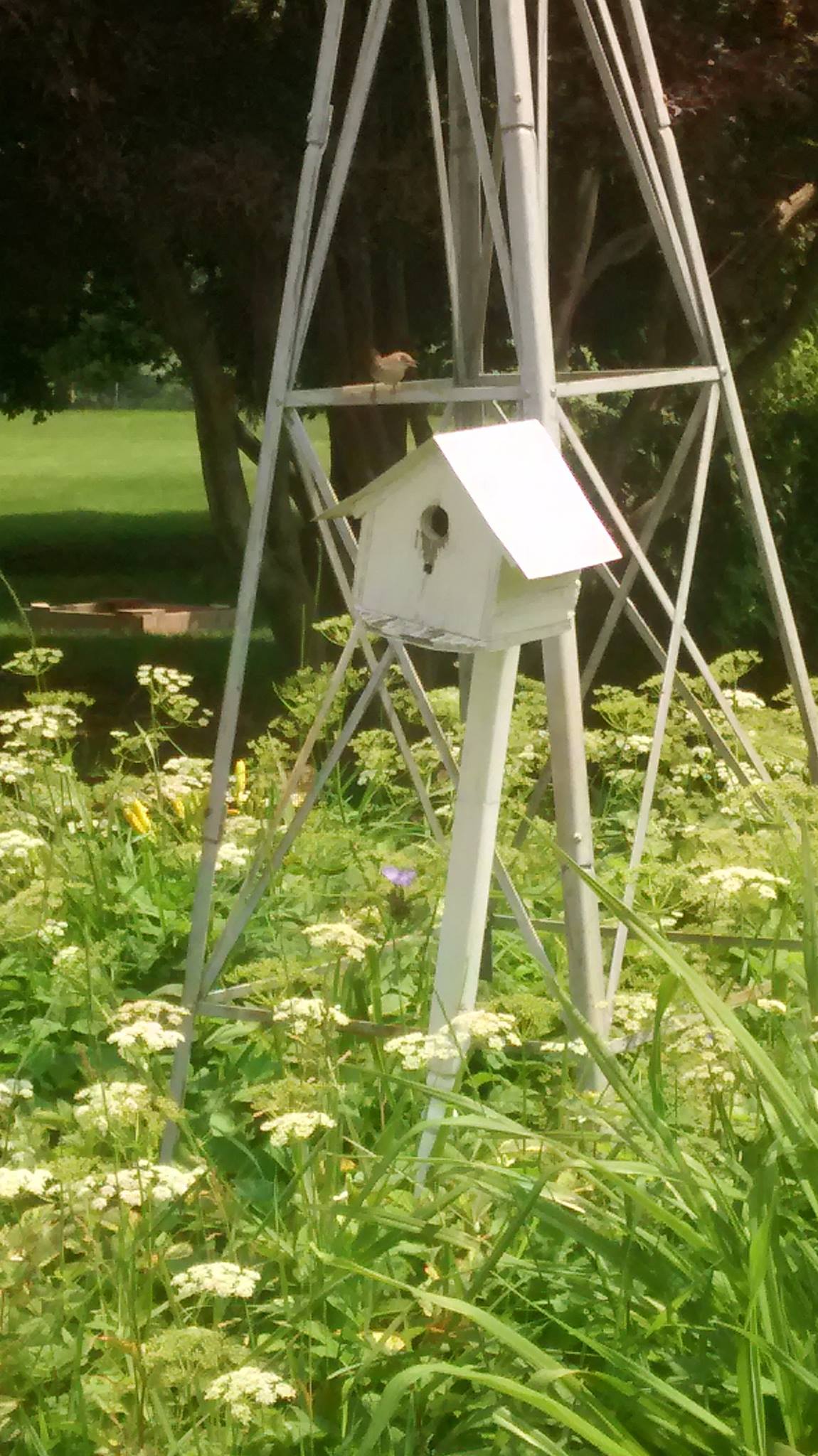 See the Mama wren? She’s fussing at me for being too close to her babies

who’re tucked inside the bird house.

When the kids are missing for a while, I step out the back door and call to the tree.  Before long, small faces peek out from among the
greenery.  They’re perched a good fifteen to twenty feet up.

Their faces
and arms bear scratches from their climbing, but no
one’s fallen yet.

The other
night, eating at the picnic table, I asked the kids what their favorite thing
is about me.

My oldest
son replied, “You let me do dangerous things.”

I had that
in mind a few days later when he asked if fire would spread on rocks.

Fire
questions deserve follow-up, so I investigated his plan which was to make a
fire on our driveway using his magnifying glass and leaves.  Playing with fire, I guess, is a no-no.  But we’re reading Gary Paulson’s adventure
novel, “Hatchet” about a young boy stranded alone on a beach in Northern
Canada.  A small hatchet is the boy’s
only tool and eventually he discovers how to make sparks by scraping the
hatchet across some flinty rocks.  Using
the sparks and birch bark he is able to make fire.

My son
doesn’t have a hatchet, but he does have a small pocket knife that he bought
with his own money at Lowes.  The other
day he came down from quiet time with a heavily shaved pencil.  “I think I’m going to like carving when I get
older,” he said, pocket knife in hand.

I imagine he
wanted to be like the boy in the book in some small way, so I let him make the
fire.  And it worked.  He used flower pots to perch the magnifying
glass above a small pile of leaves and bark so he could “watch from the
shade.”  The leaves smoked and smoldered
and I reminded him not to stare at the sun’s reflection and to keep a big glass
of water at his side.

I stayed
nearby imagining the fire somehow catching, then spreading.  All it would take is a gust of wind at just
the right moment, just the right angle.

But I let
him have his fire while his little brother squatted nearby taking it all in.

“Don’t drown
in the pool tomorrow,” I announce into the van’s rear view mirror.  Four blank faces stare back at me.  We’re running errands and I’m thinking
about their much anticipated day at a friend’s house tomorrow – the one with a
pool.

This is my backhanded way of expressing worry and fear, the by-products of my fierce love for them.

The tiniest
of wrens built a nest in a small bird house in our yard.  It sits under a metal windmill, in the middle
of a round flowerbed.  I love to see her little face peeking out of the small, round doorway.

When I hang laundry nearby, she flies a few
feet away to the Japanese Maple.  From there, she scolds me with fierce chattering – she is trying to get my
attention, to draw me away from her babies.
Inside the bird house, tiny voices whirr with excitement as she comes and
goes, her beak carrying food.

In the
evening I sit and watch her fuss.  Our clueless tomcat wandered too close to the nest and she is frantically trying to lure him away.  She flits across the lawn,
swooping low before resting in a shrub, her machine-gunning chatter
calling incessantly.

“She would climb
inside his mouth just to get his attention if she could,” I tell my husband.

She tends
her little ones with love that is both gentle and fierce.

But a time will come, not long from now, when
they will leave the nest.  Then
what?

Maybe she
will sleep for a hundred hours, relieved.