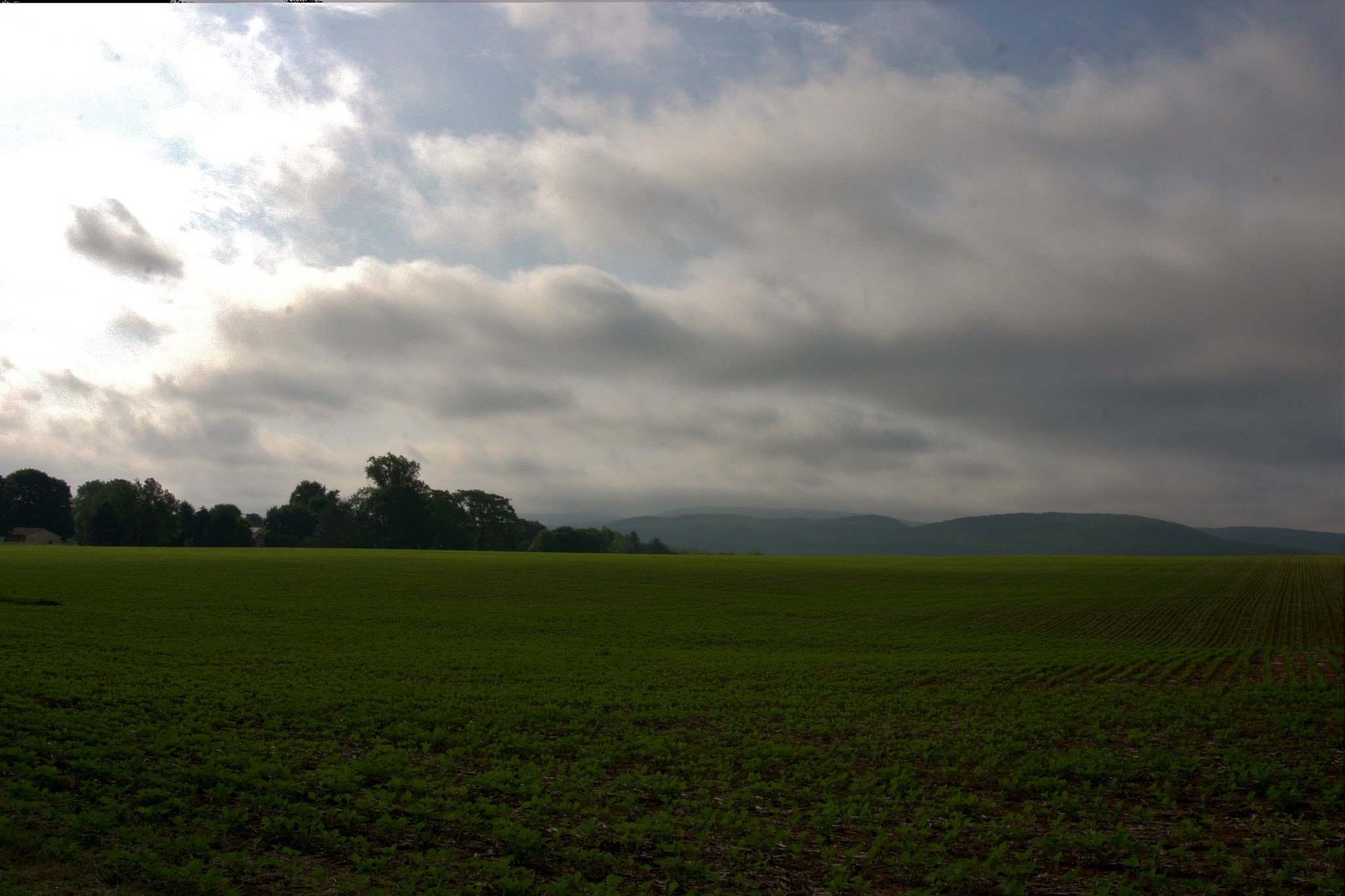 (The field of soybeans coming in across the street from our house.)

Late, I arrived at a recent Pastoral Development Day on the tail-end of opening worship.  I
slipped quietly into a single stuffed chair down low in the back of the
room, curling my legs and feet up tight beneath me.  I was never once late when I returned to work
five weeks after my daughter, my oldest, was born.  Waking at 4:30 in the morning I nursed, then
showered and drove the hour to work with her in the car seat, then nursed again
in a bathroom before joining the rest of the staff with my infant in tow at
8:00.  That was nine years ago and I was
not late once the whole summer that I worked with her at my side.

This
Thursday, though, was her field day at school and just as the bus pulled up we
realized her lunch – the packed one she needed – was sitting still inside on
the kitchen counter.  “Go,” I said, “I’ll
bring it to school.”

After the
babysitter came early so I could be on time, I gathered my things and hers and
made the out-of-the-way trip to her school.
I got there just as the buses were loading and watched her walk out with
her class.

I was late
that morning and frazzled, but happy too.
As I described it later to a friend, “My daughter forgot her lunch and I
had to drop it off at school,” then, pumping my fist in the air I added,
“Mommy, for the WIN!”

When the
singing ended a friend of mine invited me to take his seat closer to the middle of the room – he would stand.  I gathered my
things and moved for a few minutes, but eventually I turned and whispered, “I need to sit in the back to unwind.”  Then I got up and returned again to my single
chair way down low in the back of the room.

It’s been a
year or two since I attended a Pastoral Development day put on by my local
denominational conference and even longer since I resigned my pastoral
position.  In the past I’ve felt the need
and desire – the pressure – to mingle and fit in at these gatherings, to be
both visible and vocal.  But this past
Thursday I listened to my own heart, which was jangled and tired from rushing
out the door and performing the emergency lunch delivery.  I needed to sit in the back and unwind and so
I did.

Seated in
the back I watched several pastors working on their phones during the
presentation or getting up and leaving the room to field phone calls.  This was one of the hardest things for me to
give up when I left the pastorate – the feeling of importance.  It used to be routine for me to receive
upwards of twenty emails a day and now I’m lucky to receive three or so a week
other than twitter updates and notifications from my kids’ schools.

Watching
them I heard my spirit say, “I’m so grateful to be unimportant.”  It was such an unexpected thought that I wrote it
down.  Having struggled so much with feeling
unimportant,  I never expected to
find myself grateful for it.  I thought immediately of John the Baptist’s
words, “He must increase, but I must decrease (John 3:30)” and understood them in a new light.

The initial
presenter shared his story of incredible success followed by a stripping of all
he valued as God called him back to his “first love,” back to the relationship
at the heart of all things.  Much of what
he said resonated with me – the invitation to love, the unknowingness of God’s
leading – and the fact that he spoke from a time and place in his story that is
as yet unresolved were all encouraging.

I could have
told his story, as it is also my own, except for the great success part.  God has kept me from that – a fact over which
I am often frustrated, bordering on bitter.
It’s one thing to have great success and be called away from it – it is
another altogether to never have arrived.
And yet, listening, I felt my spirit say, “God loves me very much.”  This also, I wrote down.

In that
moment the love of God sank down from head to heart, from abstract idea to
incarnate reality as I pondered my life and the word-made-flesh love of God
within it.  Who knew that the sorrow of
my own professional stuck-ness could also hold within it a revelation of such
joy – “God loves me very much.”

This all
took place on Thursday and, halfway through Friday I pulled a muscle in my back
while trying to maneuver a free coffee table into the back of the van.  I knew it was bad, but I’d promised my son I
would attend his field day so, without resting, I made lunch and showered up
before carting myself and the twins over to the park.

By the time
we got home I was in excruciating pain, the likes of which I haven’t known in a
long time.  I could barely get myself
onto the floor and sitting filled my core with sharp spasms.  With the pain came fear – laying on the
floor, helpless, reminded me of last summer’s panic attacks and the tension
caused anxiety to rise within me until I felt close to drowning.

I loaded up
on pain medicine, ice and restricted myself to the floor.  Relaxing, I felt a sense of peace and
gratitude wash over me.  My back still
hurt, as it does also today, but in the midst of the pain I knew also that it
will get better.  The reality of the pain
was inescapable, yet I now know that the reality of change is also
inescapable.  Nothing in life is
stagnant, no one fear or hurt has the power to cancel out the possibility of
change and healing in the future.

I took joy
in meeting my daughter’s needs where once I felt such great pressure to conform
her needs to my own.

I tended to
my own need to unwind in a spacious place rather than seeking to fit in with
the expectations of others.

I felt
gratitude in my un-importance where once I envied the importance of others.

I felt the
love of God in what has not been given me, rather than resentment.

I felt pain,
but also knew peace at the possibility of its passing.

I read a
children’s book by Ruth Krauss not long ago called “The Growing Story.” In it, a young boy
puts away his winter clothes only to find that by next season they are too
small.  Trying on the now-too-little clothes
he exclaims in wonder, “I’m growing too!”

This is the
wonder I want to share with you this week – the grace that time passes and we
change.  Time away from my ministry
context formed these changes in me and in returning I am able to see them and celebrate.  Like the little boy, this post
is my own shout of wonder, “I’m growing too!” and I am so very grateful.

There is one
last thing I wrote down on Thursday, which is this – “It is all gift.”

May you be
blessed, friends, with grace and wonder in each and every one of your growing
seasons.