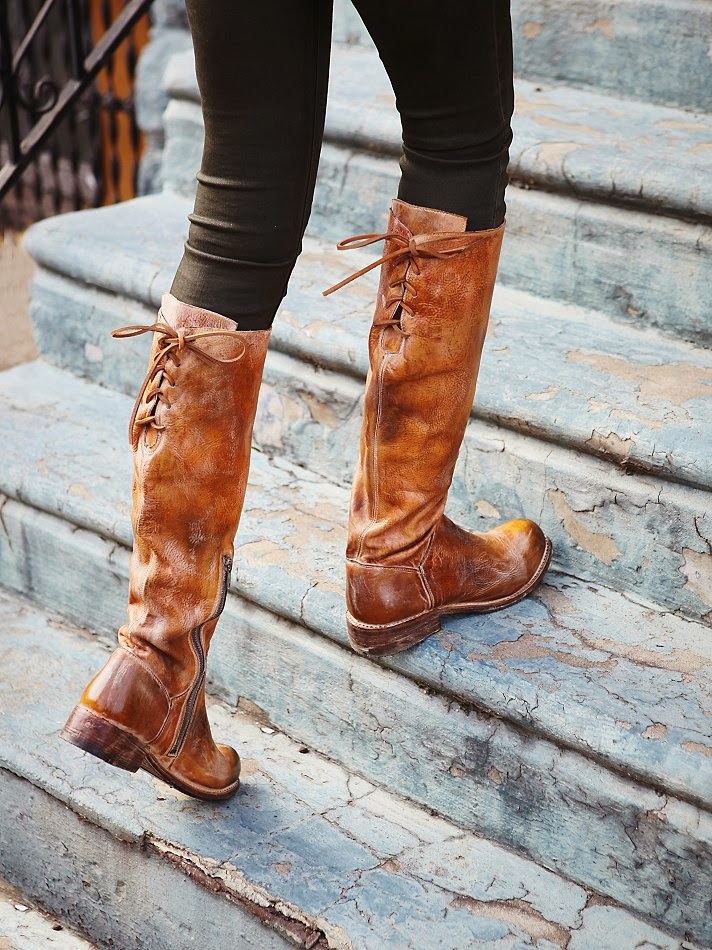 It seems to
me to be the uniform of our time – tall boots and skinny jeans and, here
precisely is the problem – I don’t own either.

Boots have
been in for awhile now and, to be honest, I thought it wouldn’t last.  And skinny jeans, really?  Still?

I want a
pair of rich leather brown boots – tall, but not too tall, flat heeled, perfection
in a shoe – and I want them now.  I
wanted them last year and the year before and also probably the year before
that.  I ordered a pair once, used, but
ended up reselling them because they didn’t fit well enough considering the
price I paid.

I can’t
afford to keep a pair of boots that don’t fit.

I can’t
afford a pair of boots, period.  Not the
ones like I want at least.

And this has
become for me a source of great self-pity.
That’s right, poor me, I don’t have nice leather boots.  And, as self-pity is likely to do, the
absence of boots in my life has become an obsession of sorts – I no longer see
people, I see the boots they’re wearing, I see the boots I lack.

Here’s
something else you should know – ever since carrying two giant babies in my
womb for nearly nine months straight, my feet are not the same.  Those of you who’ve not yet given birth may
want to cover your ears now, but yes, it’s true, pregnancy can change your
feet.

I now have
what I refer to as Old Lady Feet or O.L.Fs for short.  O.L.Fs can’t
run around barefoot, can’t wear dollar-store flip-flops or ballet flats.  I am a woman now who needs sturdy, solid
shoes, serious shoes.

For the last
three summers I’ve worn my trusty Chaco sandals – the ones I bought off of gear
trade in the months before the twins arrived.
In them, my feet are happy, comfortable, youthful (almost).

But in the
winter I suffered.

A mother of
four is on her feet constantly, if only to avoid the groping, grabbing arms of
the little people who swarm at her feet.
All day long, up and down stairs, carrying people, carrying laundry,
buying groceries, I wore shoes that lacked support.  I ached, I hobbled and limped, compensating
for my poor unsupported arches by walking on the outer edges of my feet.

I tried
Clarks.  I tried Keens.  I even tried what can only be referred to as “Old
Lady Shoes.” I bought and sold shoes on e-bay like a Wall Street day trader,
but my feet constantly hurt.

In the privacy
of my own home I took to wearing Birkenstock sandals with thick wool socks
because it was the only way I could find relief – I was desperate, people!

Last spring,
though, as I considered pulling out the stops and buying a pair of closed-toed
Birkenstocks that I couldn’t afford, I came across a pair of leather,
closed-toed Chacos for sale on e-bay.

Be still my
beating heart.

I bought
them, I loved them and love them still.
This year when the weather turned and it was time to pack up the
sandals, I had a pair of comfortable shoes just waiting for me and my thick
woolen socks.

What I’m
trying to say, is that I should be thankful, grateful for what I have which is
a great deal better than what I’ve had in the past.

Yet, the
issue of the boots remains and rather than grateful I’m, quite honestly, often
filled with pity for my poor O.L.Fs, for my lack of fashionability, for myself
not having what my half-blinded eyes are telling me everyone else around me
has.

Self-pity
narrows the gaze, like blinders on a horse it limits our sight to the things we
believe we need but do not have.  More
often than not, it turns a want into an obsession, blinding us to the things we
do have, to the possibilities that abound all around us.

Self-pity takes me to old familiar places and wallowing there I find lies
rising up around me like ghosts from my childhood and the words they whisper
are hauntingly familiar.

“You don’t have what you want?  You must not be good enough.  You’ll never fit in.  Everyone knows you have the wrong shoes.  What’s wrong with you??”

Suddenly all
of life is reduced to that which I do not have.

I’m no
longer able to see or appreciate the beautiful home I live in, my sweet
children, the warmth of the woodstove, the love of my husband who could care
less what I wear and, quite honestly, likes me best undressed.

Self-pity
tells me, in short, that life and wants and needs are a formula:

If you want X, get
money, buy X and you will Be Happy.

This week it
occurred to me that I accept that formula even though I don’t have money and
won’t be buying “X” any time soon, because such a formula places me in a position of
power and control.  Self-pity says, “Yes, you need
what you think you need and it’s up to you to get it, but you’re not able to,
you poor, poor thing.  There must be something wrong with you.”

Self-pity
revolves around self.

I tell
myself sometimes that if I could only get that pair of boots all of life would
come together neatly just like I want it to.  I could finally wear that
cute corduroy skirt I found at Community Aide, I could venture into the realm
of skinny jeans (although my instinct warns me that would be a move I’d regret –
giving birth changes more than just your feet).  I would fit in, I would be
happy, I would be wearing the uniform of my generation.

It’s
possible that all of those things are true.
Possible, but not likely.

In the
meantime, I have my Chacos, I have a cute pair of rain boots.

I have feet,
I have legs, I have a wooden floor to stand on and the privilege of walking in
grass and snow or sitting inside with the bottoms of my feet melting against
the wood stove whenever I want.

I have so
much.

And I’m not
willing to let self-pity steal that from me anymore.

I’m not just
talking about boots, of course.  I’m
talking about life and focus and where we choose to place our energy, the way
we allow our human desires to lead us into places that are narrow or wide.  The desire for boots isn’t the only area in
which I’ve allowed self-pity to blossom, but it’s the easiest one to write
about for now, the easiest to joke about.

This is not
a story about boots.

It’s a story
about desire, about longing, and about where we chose to let our eyes rest,
where we place our focus and the things or people or positions we set our heart
on attaining.

Maybe I’ll
get a pair of boots for Christmas.  Maybe
they’ll go out of fashion.

In the
meantime, though, I don’t want to let self-pity rob me of all the things I do
have.  I want to pray for a wider vision,
for a more open heart.  I want to confess and repent.  I want to see
more than what I lack and I want to trust in the one who is the giver of all
good things – the giver of Chacos and Birkenstocks, of flip-flops, ballet-flats
and yes, tall leather boots.

Maybe you do
too?

Maybe the next
time you find self-pity taking root like a weed, you’ll think of this story, you’ll
remember that the choice is yours to make – between life and death, between
self-pity for all that is not and gratitude for all that is.