In the morning, after the twins chug their milk and the
heavy wet diapers of the night before are deposited in the already overflowing
trash, I sit in the corner of the couch with Isaiah to look at a book.  We flip through the pages of a National
Geographic pointing out choo-choos,
ho-hees and brooommmm-vrmmms.

Just about the time he decides it’s safe to sink from his perch on the far edge of one knee into the middle of
my lap, Levi climbs up, shouting in his little mega-phone voice.  Then the competition begins, with shouts and gestures, to see who will be first to name
and claim the trains and horses, houses and cars on each and every page.

Their older brother appears on the stairs, sniffly and sleepy.  He bursts into tears after blowing his nose because he doesn’t want to be sick and I carry him off to the living room where he too wants to look at a book.  The twins, dispersed by the sudden appearance of their crying brother, now flock back, climbing on.

Then, in that moment, I am done, already, surrounded and sinking among a swarming mass of need and desire.

I saw a picture recently of the man who holds the world record for wearing the most bees at once and I feel like I imagine that man must feel as they’re putting on the last few bees – frozen, pushing down the panic, hoping to make it through until they can get. them. off. 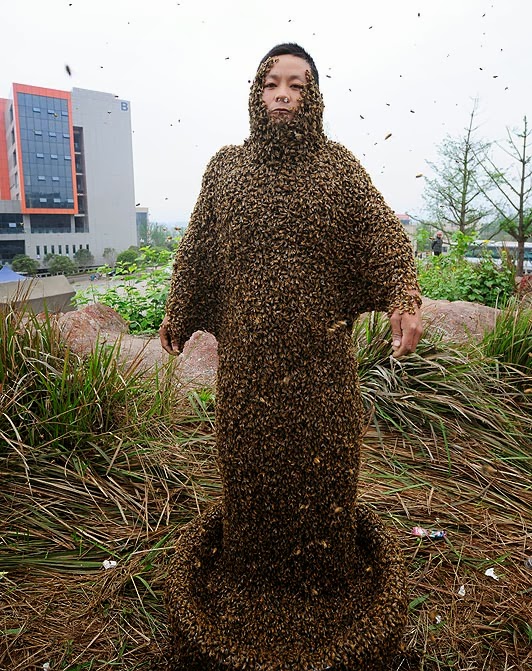 The pictures capture the way a moment feels sometimes, stretched wide and deep.  The bees gathered clinging, swarming for the time it took to capture them on film and then, I imagine, they were gone.  Time paused, like a butterfly alighting on a flower, long enough for the man to practice some deep breathing, long enough to feel the full weight of that particular moment.

It’s so much the same with these little bees of mine who climb and cling just long enough for the stress to rise, long enough for me to practice some deep breathing before they too are on their way – off and running, climbing, soaring.  So I take picture after picture, I inhale and exhale and each moment opens, one-by-one.

I surrender to what is right here, right now on what feels like the one-hundred-thousandth snow day because this moment too will pass as each one before and after does until all that remains is the memory of this humming hive.