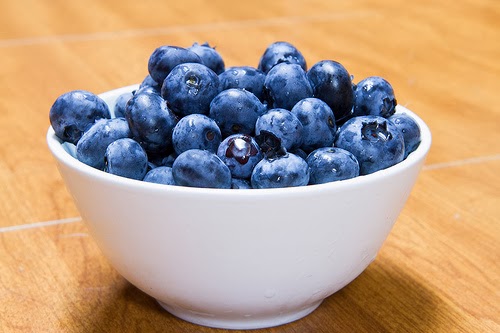 We inherited several gallon-sized bags of blueberries when
my in-laws sold their house and moved to Florida.  I like to think that they were handpicked by
my mother-in-law some time ago, back before the brain tumor and multiple
surgeries left her partially paralyzed, before we lost her without really
losing her in so many ways.  She was a
force to be reckoned with in the blueberry patch bringing them home by the
bucket-full and urging them onto her grandchildren who wandered her house like
a little Blue Man Group, stained with perpetually blue hands and faces.

After helping his parents load their truck, John can back
home with a few frozen roasts and the blueberries.  That was last March and if those berries were
excavated from the depths of my in-laws’ deep-freezer, carbon-dating may be
required to get their exact age.

But here’s the thing – I don’t use a lot of frozen blueberries.

So a lot of those berries sat in our freezer – like two of
the three bags – and then got moved with us when we sold our house and moved
this past summer.  And now, here we are,
preparing to move again and I’m cleaning out our deep freezer and there isn’t
room in our small freezer for everything.  So I was getting ready tonight to make some
blueberry muffins because – God forbid I throw out my mother-in-law’s
blueberries.

Sometime later, after the twins were to bed and the
dishes done, after thawing and straining the dark purple juices into the sink,
I realized that I don’t really have to make those muffins.

I just don’t have a double-batch of muffins in me tonight,
nor do I imagine I’ll have it in me sometime in this next harried month before
me move.  And, oh my, I can’t imagine
lugging them along with us to the new house like some big blue ball and chain.  So I’m cutting myself loose, cutting free of
my own self-induced guilt.

My mother-in-law’s will, her spirit – neither the essence of
who she was or who she is – cannot be found in those old berries, it just can’t.  And my tossing them isn’t any more a betrayal
of her than it is a betrayal of people all over the world who’d give their
eye-tooth for those berries.

It’s just a simple act of surrender, another form of
letting-go and laying down the ideal self in favor of something more real which
looks a lot more like a very tired, worn-out mother of four young
children.

My mother-in-law has four children – grown now – and my
husband remembers picking blueberries as a child, bringing them home in buckets
and eating more than he picked.  He wants
to plant blueberries at the new house, who knows how many, but it’s part of his
plan.  I look forward to walking out
among them with my kids in tow, picking and eating and maybe even freezing a
few and thinking of my mother-in-law from time to time.

When their hands and faces are stained and their bellies
popping, I’ll ask them if they remember how Bunia used to let them eat all the berries
they wanted.  I’ll tell them how I
dreaded changing their blueberry-filled diapers and how I tried to subtly curb
their in-take.  I’ll tell them how much
she loved them then and how she loves them now, only differently.

And it will be enough.