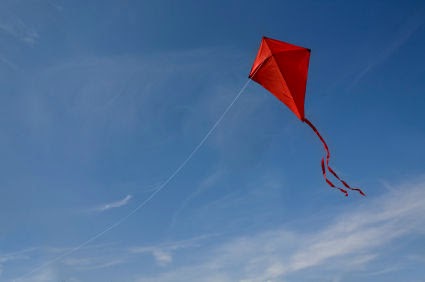 Wendy knew the story of Marooner’s Rock. It was named by evil captains
who abandoned sailors there. They would drown when the rising tide covered
them.

Soon after the dinghy was gone, two feeble cries drifted over the
lagoon. “Help! Help!” Peter and Wendy lay on top of the rock. Peter
was wounded, and Wendy was tired and weak. . . .

“We have to get off the rock,” Peter said. “The tide is
rising. Soon we will be covered.”

“I am too tired to swim or to fly,” Wendy said weakly.

“And I don’t have the strength to carry both of us,” Peter
moaned.

“Then we will drown,” Wendy said.

They put their hands over their eyes to shut out the horrible thought.

Something touched Peter’s cheek. He opened his eyes. A kite hovered over
the rock. Its lone tail had brushed Peter’s face. “Michael’s kite!”
Peter exclaimed. “He lost it the other day, but here it is!” He
pulled the kite toward him. “We shall use it to carry us home.”

It’s only Monday, but, already, I feel the water rising.

There’s too
little time, too little money, too little of me to go around and I’m stacking
sandbags in my mind, guarding against the scarcity of my own limitations.

There are days when it feels like I live on Marooners’ Rock, days when it
feels that the tide is constantly rising, slowly licking at the small space
I’ve secured.

But at least I’m in good company, because so many of us live this way, don’t
we?

Believing the lie of too little, we hold our breath, shrinking back from the
shrinking shore, moving from crisis to crisis as, surely, the water rises.

Like Peter and Wendy, we are tired, we are weak and many of us are wounded.

“We will drown,” I say with certainty as I seal the envelopes that
carry the checks to the electric company, the phone and natural gas.

“I am too tired,” I say as I climb the stairs again to face the
fussy child who will. not. sleep.

“I don’t have the strength to carry both of us,” I think, as I
look at the long and weary face of my tired husband whose head aches nearly
every night of the week.

Isn’t it illuminating that deliverance for Peter and Wendy comes not in the
form of increased strength or personal exertion, but rather in the playful and
gentle nudge of Michael’s kite?

Most often, when I grow weary of my self-imposed exile on Marooner’s Rock
and finally, at last, lay my head down in surrender, grace and deliverance
arrives disguised as the gentle voice of playfulness, the invitation to
imagination and creativity.

The more I tend playfulness through prayer and creativity, the more I’m able
to reject the lie of Marooner’s Rock.  The truth is we’re not abandoned, we’re not alone, there’s always Someone waiting to carry us home.

Playfulness requires trust and surrender, a willingness to live openly and
unabashedly hopeful in the sheer goodness of the moment and it’s here that we
find deliverance, here that we find a wind strong enough, gentle enough to
carry us home.

Is there a practice of playfulness or creativity that helps you find your way home?  I’d love to hear about it in the comments section . . .