Writing It on the Walls

Don’t tell my two-year-olds, but in a classic case of role-reversals, I’ve been writing on the walls while they nap.

It all started in the morning when I woke in the darkness and smacked my head straight into the wall of things I hadn’t done the night before.  My mind crowded instantly with images of the bags that needed to be packed, the lunches to be made, the papers waiting for initials, the clean laundry that sat souring in the washing machine, and so-on and so-forth, so that I was sinking from the start.

Then, as the morning progressed, I yelled at my son and brushed coldly by my daughter when she wouldn’t stop crying over banging her shin on the stairs. I had an all-out screaming competition with a two-year-old that consisted of the word “no” being exchanged at louder and louder volumes until my throat was sore and he collapsed in tears.

And then, after loading the stroller into the van and out and packing it with toddlers and pushing it through three sets of doors, they wouldn’t let me walk my kindergartner to his classroom (did I mention this was his first full day of school?).

Yes, that’s how it started.

But there were the emails too, and dishes and the crumby, crunchy floor and two two-year-olds climbing in and out of the cupboard with a seemingly unending barrage of “Poop! Poop!”

Then we had the WIC appointment which, thankfully, didn’t require finger-pricking, but the twins whined the whole way there and all the way to the farm stand where we spent our checks on tomatoes and corn, cucumbers and peaches.

I relished the silent ride home while the twins crunched on cucumbers, I thought things might turn out OK after all.

Until we parked and I backed into a tree with what I’m hoping was my bumper.

I didn’t even stop to look at it because I still had two little people to get out of two buckles each and across the street and even on that short little trip, shoes fell off and had to be replaced and they battled over crossing the threshhold of Home just. because. they. could.

Then the neighbors came home from the funeral, home from burying their baby boy who never saw the light of day, who died in-utero at thirty-nine weeks because the cord got pinched.

And I didn’t know what to make of it all, only that it wasn’t going well and I couldn’t fix it, not any of it.

But somewhere in the middle of it all, as I stood desperate in the kitchen, the words of Julian of Norwich came to me.  Julian, who lived her life cloistered in a cell with two windows – one that faced out on the world and one that faced the alter and cross.  Julian, who lived in a time of war and plague and deep anxiety, yet dared to believe and claim that we are all held, all sustained by the love of God, her words echoed through me,

Julian’s words sank into me like an anchor, a life-line, restoring, reconnecting me to the One who is life, the One who was and is and will make all things well.  So I wrote them down on contact paper and posted them over the sink.

I think of that baby, so close to life, but cut off, inexplicably from its source, and I think that I am often not so far from that. I wrote Julian’s words on the wall, so I could remember, when everything seems dark that there is something, someone, who holds it all, holds Us all in the palm of his hand. 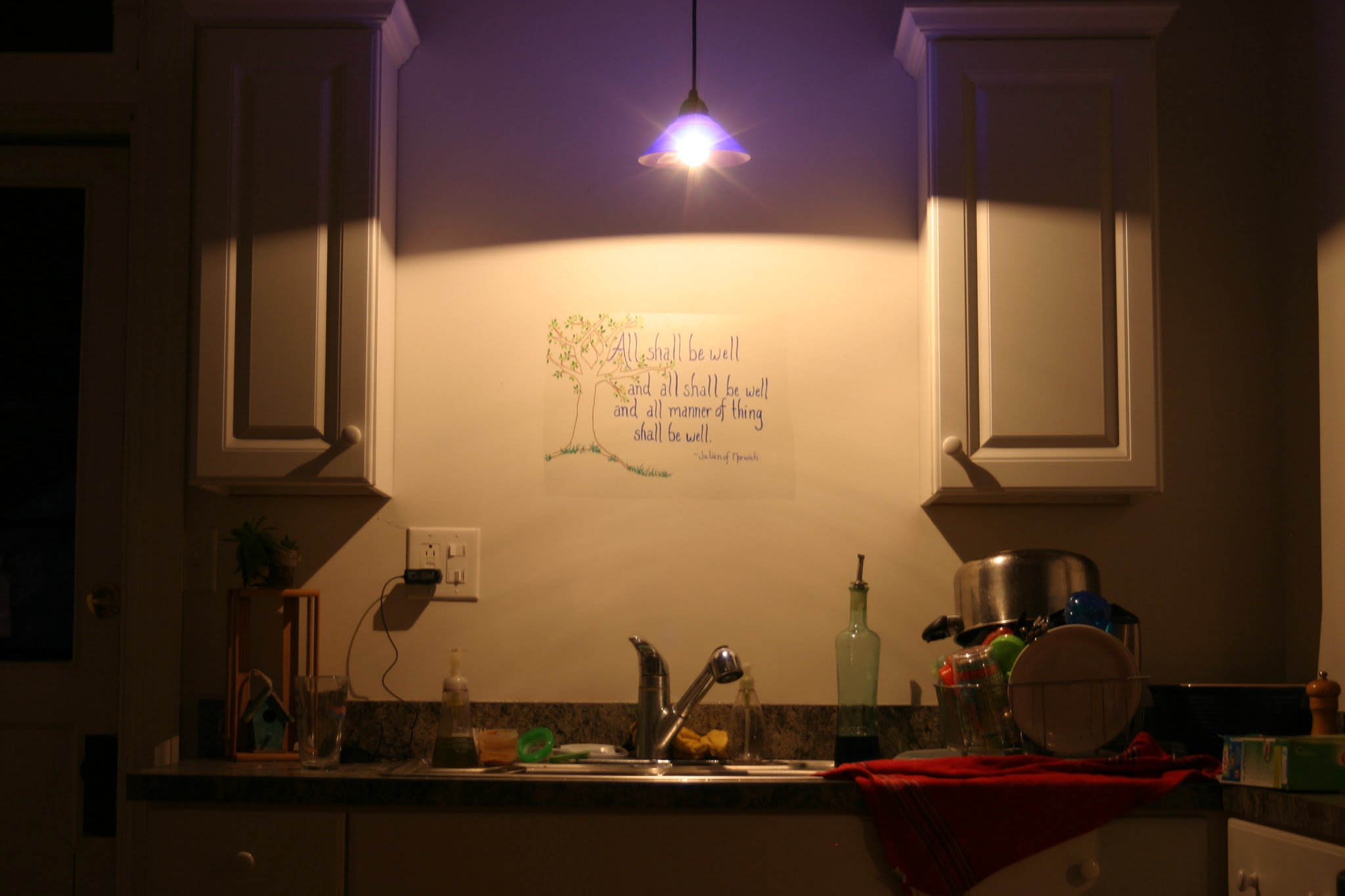