Laughter and Tears (for Mother’s Day)

“We’re thinking about having another baby,” I said, keeping my hands at two and four on the steering wheel and glancing over at my mother
who sat holding her purse in the passenger seat.

We were a little over a month into her diagnosis and several
weeks into chemo.  Instead of our annual
birthday visit filled with fourth of July parades and fireworks, we were
driving North, into unknown territory, following vague directions to a wig shop we hoped would be open.

I explained how we would like our kids to be close in age
and so were thinking about a second pregnancy soon and my Mom offered her blessing, but looking back, that wasn’t what I
was really looking for.

“I’m afraid I’m going to be nine months pregnant and you’ll
be in the hospital somewhere and I won’t be able to be with you,” I said, asking
without asking what I really needed to know – did she think she was going to be
ok?  Was it safe to go on living
life?

The wig shop was closed but we stopped anyway, leaning and
peering in the windows like children outside a candy store.  Wigs hung on the far wall of the darkened room,
including a huge head of wildly curly hair several feet long that we joked
about as we drove to the second shop on our list, Elvira’s.

Elvira’s was clearly an African-American hair salon, but we
went in undaunted and Elvira herself served up the compassion we
needed, showing us several styles of wigs and color swatches.  It was funny, the thought of my mother
wearing a wig prepared by a woman named Elvira of all things and we laughed as
we drove home, joking, because it was the only way to avoid crying.

She told me you never know what’s going to happen in life,
she could walk out in front of a truck tomorrow and be killed, any of us
could.  She hoped she would survive,
hoped the cancer would be cured, but she didn’t know and couldn’t know for sure.

It was a true answer, truer and braver than the one I’d
wanted.

“Is she going to make it?” she asked in a stage whisper
after my Mom left the room to use the bathroom.

That same weekend we drove an hour to a “Look Good, Feel Better” session
suggested by the oncology center.  We sat
alone in the wide, empty parking lot of a large gray school building waiting
for someone, anyone to arrive.  Disappointingly,
there would be no class of women gathering together, bonding to fight cancer
with beauty and self-esteem, just my mother and I and a middle-aged woman who
showed up late and apologetic and, later, her friend.

We sat in a cramped dressing room that reminded me of my days
in theater and a woman in tight, revealing clothes gave my mother a makeover –
my mother who grew up in the conservative south and bought her first tube of
lipstick late in life.  We both sat
submissive, desperate, as this young stranger kept up a steady stream of chatter,
applying layers of makeup while explaining the effects of chemo on skin and
lips and hair.

We practiced tying scarves to cover the hair-loss that was
imminent and my Mom tried on a wig or two.
The stranger gave her scarves and hats and a complimentary make-up bag.

Her question left me speechless and I stared at her blankly before
mumbling a diagnosis.

“A lot of them don’t, you know,” she added, as if by way of
explanation and I quickly arranged myself in a hopeful posture, coloring the
situation beautiful even if it wasn’t.

I shaved my mother’s head on her birthday, as best as I can remember, though it may have been a day or two before or after.  Her hair dresser had offered to, but I convinced her to let my husband buy a set of clippers from the pharmacy and we shaved it in her upstairs bathroom.

She sat on the old computer chair under the bright light and whirring fan.  She hadn’t wanted me to cut her hair and when I asked her why she said she was afraid it would be too upsetting for me.

There’s no sparing the upset, though, when cancer’s involved and I said I knew it might be upsetting, but that it was better than thinking of her getting it cut without me in the back room of a beauty parlor.

This is what love does, I guess.  It travels with, even through the vallies of darkness and death, using laughter and tears to crack open and water these most dry and desolate lands.

We joked and cried our way through cancer and I did get pregnant and bore that baby on the same day my mother received the stem cell transplant that saved her life in a hospital some five hundred miles away.  April 12, 2008 we each lay in hospital beds in separate states nursing new life that had already been nurtured through laughter and tears.

I didn’t know then what I do know now, that laughter is the
seed of hope and tears the rain that nourishes the fragile seed.  If we will but wait, hope grows into a tree
that bears us in its leafy shade through every moment of joy and sorrow.

Happy Mother’s Day, Mom, You’re one of the strongest and bravest women I know!  I’m so glad you “made it!” 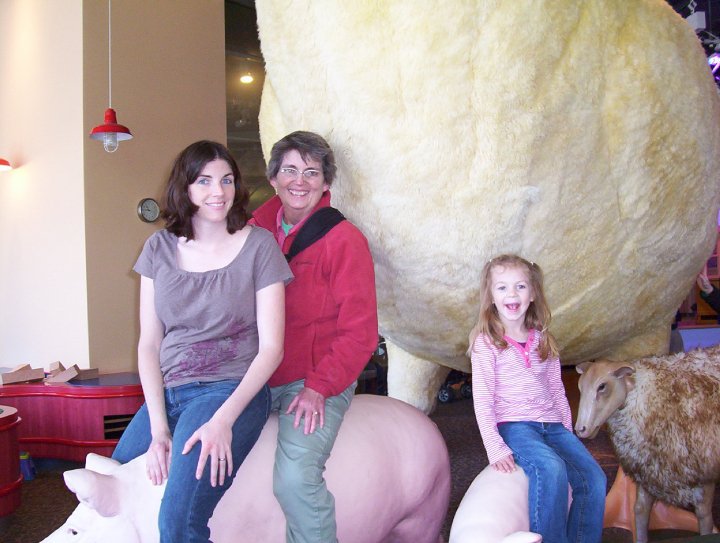 My Mom, my daughter and I two years post transplant.

Linking with Laura and Jennifer.