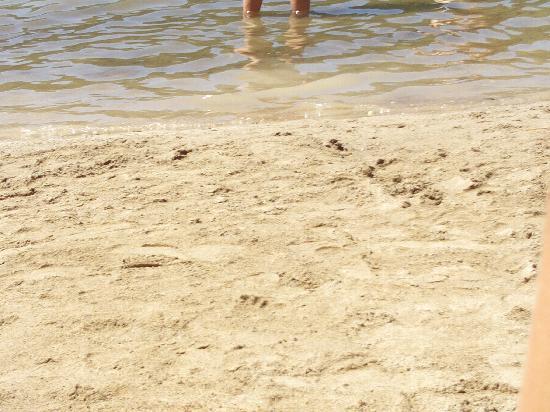 He crosses the sandy shore, walking his slow, sturdy toddler walk and carrying a small, plastic teaspoon filled with sand.  Shirtless, still wearing his pajama shorts, he focuses with a force of determination that causes his hand to shake.  Depositing the sand on a pile of his own making, he crosses the sand again to refill his spoon.

“Mountain,” I say in my sing-song Mommy voice, “You’re building a mountain.”

Looking up to where I stand, knee deep in the icy cold water, he squints into the sun and smiles.

“Mout-een, mout-een,” he confirms, before returning, spoon in hand, to the impossible task before him.

He is moving a mountain, spoonful by spoonful.

His twin brother, the tumbler, light-footed little Levi, who just days before nearly drowned in a foot of water, comes splashing, tripping out to me.  His eyes are half-shut, blinded by the light, but he runs, carelessly toward my outstretched hands.

Locking his hands in my own, I lift him off his feet and drag his body, belly-up, through the water, making wide, splashing circles around me, spinning him like a washing machine on rinse cycle.

I worry that I will hurt his arms, that water will splash on his face, but he is giddy with delight, enraptured with the pleasure of the moment as he whirls through it.

“Moe!  Moe!” he cries when I attempt to right him on the sandy floor, he cannot get enough of this moment’s joy.

My boys made a tableau that day at the lake, two pictures of faith – the slow and steady faith of the Widow’s Mite and the head-long falling faith of one carried by arms of Love.  Two boys, two pictures, so different, but not so very far apart, laid out before me as I stood between them, knee deep in the icy cold water.

This post is linked with Playdates with God and Jennifer Dukes Lee.